1970’s but sadly this failed to come to fruition. The concept was reborn in the late 1990’s when the Minister of the

to share one building in an area ripe for mission. Many shared Worship and social events took place over the next

few years and folk began to know and value each other.

purchase order was agreed and joint planning meetings began in earnest. In 2006 the Anglican Church

a small room separate from the Methodist congregation. A series of away days ironed out the minor

share mission within the community but importantly wanted to become one in worship. Thus the two churches

vision of unity to Worship and serve the Community together. 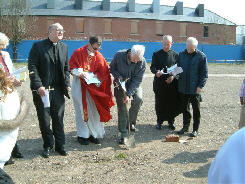 Ministers and members of the Church laying the Foundation to the Building.

A Contract was entered into with a builder in May 2007. Later, a Legal agreement was drawn up in order to part

company with that builder and a new contract with an alternative builder was agreed in March 2008. Building work

discussions took place with them to endeavour to negotiate a completion cost. The church was approached by a

new builder in October 2008. Unfortunately this builder went into administration in May 2009. A local business had

been subcontracted to complete the works in July 2009 but again, the builder went into administration in September 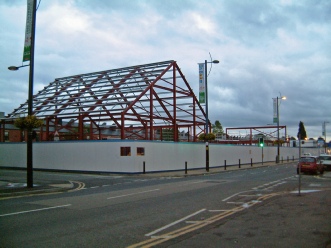 The Building of the Emmanuel Centre Community Hall.

Community Centre. The twenty-two appartments on the three floors above had previously been completed and 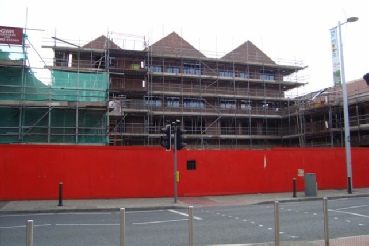 The twenty-two affordable appartments above the Emmanuel Centre.

In February 2013 the City Council awarded the church a Regeneration Grant of £60,000, in order to complete the

outside works including the car park. This work was completed in February 2014. During the course of completing

the outside works upper brick work problems were discovered and all safety issues were addressed. There had

damage to the ceiling/insulation tiles. This latter was an insurance claim and repairs begin Thursday 27th February

2014. The Church  worshiped in the Community Room each Sunday. The remainder of the week a wide range of

community groups occupy the Centre which is staffed by volunteers.

The Worship space was completed and was officially opened and dedicated on 4th July 2015. Throughout the entire